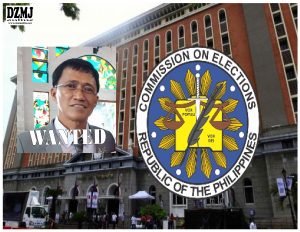 THE Commission on Elections First Division has cancelled the Certificate of Candidacy of Angat, Bulacan’s Vice Mayoralty bet who is running for re- election.
The accused Gilberto C. Santos, Vice Mayor of Angat Bulacan who is currently facing criminal charges at the Regional Trial Court in Malolos had his Certificate of Candidacy Canceled by the COMELEC.
According to the ten paged Resolution from the First Division duly signed by Presiding Commissioner Al A. Parreno, Commissioner Rowena Amelia V. Guanzon, Commissioner Marlon S. Casquejo found that the accused has violated the law through misleading the commission.
“Clearly, this case constitutes flight from justice: (1) Respondent was charged for the commission of several crimes, (2) He has knowledge of the indictment instituted against him and fully aware of the warrant of arrest issued against him, and (3) He flees from the jurisdiction of the court and departs from the place of residence to avoid or evade prosecution. They warrant a conclusion that Respondent falls under the term “fugitive from justice” and thus, disqualified to run for local elective office.
With the above disquisitions, it cannot be gainsaid that Respondent deliberately made a material representation in his COC that is false. He misrepresented that he is eligible for the position he seeks to be elected when in truth he is not. In Velasco vs. COMELEC, the Supreme Court held that “[S]eparately from the requirement of materiality, a false representation under Section 78 must consist of a deliberate attempt to mislead, misinform or hide a fact which would otherwise render a candidate ineligible. In other words, it must be made with the intention to deceive the electorate as to the would-be candidate’s qualifications for public office.”
Finally, as material misrepresentation in a COC is an Election Offense under Section 262 in relation to Section 74 of the Omnibus Election Code (OEC) which the commission has the constitutional duty to investigate and prosecute the election offense aspect of this case should be referred to the Law Department for the conduct of Preliminary Investigation as there may be a possible violation of election laws.” Part of the ten page COMELEC 1st Division Resolution 2nd paragraph of page 9.
The accuse through his lawyers argues that “he did not go into hiding but is only in a safe place for his security is of no moment as the evidence on record shows otherwise” also part of the ten page COMELEC 1st Division Resolution last 2 sentences on the 1st paragraph of page 9.
The Commission on Elections 1st Division Promulgate the Resolution dated March 15, 2019 and this publication manage to acquire such document March 18, 2019. Mj balaguer, 09053611058, konek@dzmjonline.net )