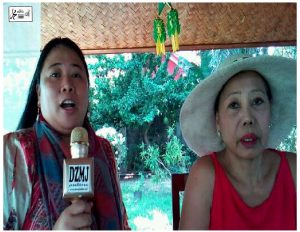 While most students enjoy their weekends at home, Claire Ann Taboy, a Grade 6 student from Pagudpud South Central Elementary School in Ilocos Norte, uses this time to sell lumpiang shanghai on the streets to earn money for her and her siblings’ school allowance.

Her mother cooks the lumpia, which she sells around their neighborhood with the help of her father who is a tricycle driver. This first-time National Schools Press conference (NSPC) qualifier does not mind the scorching heat of the sun, or the inviting laughter of her friends who are playing Chinese garter. Her priority is to help her family.

Poverty did not deter Claire from maintaining a good standing in class. She believes that her decision to join campus journalism two years ago brought about significant changes in her elementary life. For one, it allowed her to discover her talent and passion in writing. She also learned to love reading, particularly newspapers, and realized that through writing, she has the freedom to express her views. She also became more aware of social issues. Claire did not only gain knowledge and skills, but also a lot of friends.

When asked about her most challenging moment in campus journalism, Claire recalled her experience at the start of their training workshop in preparation for the Regional SPC. Hardly making both ends meet, her parents were hesitant to let her join the event. Fortunately, her school, coaches, and other stakeholders helped her pull through until she finally made it to the national level in Lingayen, Pangasinan this year.

“Joining NSPC is a dream come true. I believe that I already brought honor to my school, and to my family. With this, I will continue writing. Of course, I will still sell lumpia for my family,” she shared.

Truly, poverty did not stop Claire from writing her own success story.

Claire Taboy – Claire Ann Taboy, Grade 6 student from Ilocos Norte and first-time NSPC qualifier, did not let poverty stop her from pursuing her talent and passion in writing. 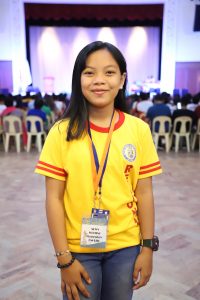 Eyes that can’t see and an exceptional ability

Photos are frozen memories perceived by the eyes. But what if these photos are printed by someone who cannot even see them?

Visually impaired Flordan Porton can print magnificent pictures and leave smiles and astonishment on his clients’ faces as they explore Region VIII’s booth during the bazaar exhibit of the 2019 National Festival of Talents (NFOT) in Dagupan City.

Aside from photo printing, which he learned just last year, Flordan is also skilled in many other things: He started playing the guitar in 2009 and weaving rugs in 2017.

Supported and guided by his teacher, Marlon Maestre, Flordan operates the computer from which he prints the transferred pictures. Maestre customized his computer by putting a voice synthesizer and by sticking Braille on the tiles of its keyboard. Flordan started learning how to read Braille at the age of nine.

“When I was younger, I wondered how I am going to learn to read. But when I found out about Braille, I realized that nothing is impossible,” Flordan said.

Flordan is a student of a transition program in Oras East District Special Education (SPED) Center in Eastern Samar, and he dreams of becoming a teacher someday. He tried enrolling in SPED classes before but due to poverty, he had to stop schooling. However, a persistent Flordan still pushed through by going back to SPED school in 2006 at the age of 16. Now that he is 28, he is still working to build a brighter career for himself. He even had this rare opportunity of joining the NFOT.

“I was really nervous since photo printing is a new skill for me to showcase. I practiced together with Sir Maestre. I was feeling nervous, knowing that the judges were watching the things I do, but then, win or lose, I am still grateful that I had the chance of sharing my talents and inspiring others.”

Flordan was raised in a big family of seven siblings. He is the sixth child, and his father passed away when he was only two years old. In that same age, he suffered from measles which led to his blindness.

Flordan’s life was never easy. For him to go to school, he needs to ride a boat and embark on a 15-minute walk when he does not have enough money to pay for habal-habal ride. Despite the challenges, he is still eager to learn and finish his studies.

The money he earns in rug weaving and photo printing helps him finance his education. Fortunately, Maestre, a former scholar of the Resources for the Blind, has the privilege of requesting materials from the organization for Flordan’s books. Since he is now in a transition program or a mainstream class, Flordan uses regular books that were rewritten into Braille.

“I want to finish my studies and help others, especially those who have disability. All I can advise them is that if there’s a chance, they should grab all the opportunities given by the people with kind heart who are willing to help.”

PHOTO CAPTION
Flordan Porton – Despite his visual impairment, Flordan Porton from Oras East District Special Education Center in Eastern Samar prints photos, plays the guitar, and weaves rugs. He is happy and grateful to be given the opportunity to join their region’s bazaar exhibit in the 2019 National Festival of Talents in Dagupan City. 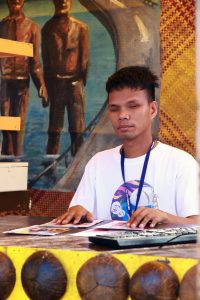