with photo courtesy of Shaine Pe 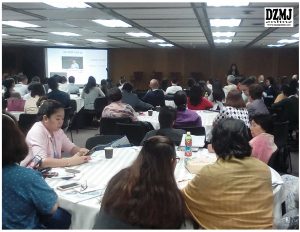 DZMJ Online Season 12 Episode 7 is with the Philippine Council for Health Research and Development with its Executive Director Dr. Jimmy Montoya and he talked about Medical Marijuana and he says that even though its illegal, it already being used for medical purposes even today

The 56 enterprises who attended belonged to the Micro, Small, and Medium Enterprises (MSMEs) sector located in the province of Bukidnon.

PSTC-Bukidnon highlighted SETUP as it is the current demand of their participants. They discussed the guidelines and the requirements to avail of the SETUP program.

At the end of the program, the agency gathered a total of 13 firms who were identified as SETUP-ready, while the others will yet to submit their requirements in the following months.

On that day also marked the election of the new set officers for the Step-UP BUK Association.

The purpose of the creation of the organization is to help DOST in the identification of potential SETUP cooperators, feed backing mechanism in obtaining information about the SETUP applicants, identification of additional technology needs of existing SETUP clients and collection / reminder of on time refunds.

Step-UP BUK Association also served as an independent body which later on will be registered to the Security and Exchange Commission (SEC). PSTC Bukidnon serving as Secretariat.