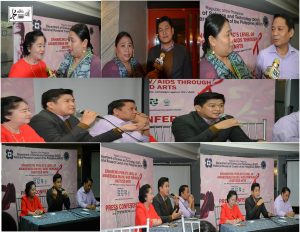 DZMJ Online Season 11 Episode 5 is at the Sulo Hotel in Quezon City where a Press conference was held in regard to a greater public awareness on HIV AIDS through Digital Arts spearheaded by the National research Council of the Philippines or NRCP, Department of Science and Technology National Capital Region or DOST NCR, Technology Applications and Promotions Institute or TAPI and Philippine Council for Health Research and Development or PCHRD and the National Academy of Science and Technology or NAST.

Present in the conference where Dr. Brian S. Bantugan, NRCP Member in the Division of Humanities, a Research Director at the St. Paul’s University Manila, Dr, Marieta Banez Sumagaysay, the Executive Director of the NRCP and Dr. Arnel Salvador, NRCP Vice President and Chair of the Division of Physics.

All hands on deck for banana farmers

THE government and the private sector has linked arms to help banana farmers in Oriental Mindoro enhance their farm management skill and raise their level of competitiveness in the global market.

Provincial Agrarian Reform Program Officer Marilou C. Baslan said the farmers will be assisted in improving the quality of their products and meeting volume requirements. These two factors are considered as the first steps in attaining global success.

Groups joining the cause are the Department of Science and Technology (DOST), the Technical Education and Skills Development Authority (TESDA), and local agricultural officers, together with the San Miguel Foods Corporation (SMFC) and the Bahaghari Global Food, Inc. (BGFI).

“We are happy for the positive response to our call for support in sustaining the initial gains of the Linking Smallholder Farmers to Markets (LinkSFarM) project, which seeks to achieve sustainability, expansion and diversification,” Baslan said during the recent meeting of the site working group.

She also said the project takes into account cluster formation, preparing the cluster supply plan, market chain study for actual collection, and marketing of banana of the saba variety.

Each participant shared essential information and assistance to the farmer-beneficiaries of the LinkSFarm project. SMFC representative Ben Brosales presented the cassava assembler program for the farmers for project diversification.

Meanwhile, Maria Eliza Paylago of BGFI, exporter of banana chips, discussed their market requirements with the assisted farmers. DOST representative Maria Cristina Caringal said new technology for banana production would be shared with the farmers to improve the quality and increase the volume of their harvests.

Agrarian Reform Secretary John R. Castriciones yesterday moved to create a task force to investigate reported irregularities in a regional office of the agency. The new group’s mandate is to come up with immediate resolutions on the concerns of farmers from Pampanga and Tarlac.

“While we are investigating this case, we will re-survey the problematic lands, process your land titles and attend to your other concerns so that there will be no wasted time,” he said. This assertion came from a dialogue held yesterday at the Department of Agrarian Reform Central Office.

Volunteer Against Crime and Corruption (VACC) Regional Head Pyra Lucas, who accompanied the farmers, alleged that there have been anomalies in the regional office that have delayed the awarding of the farmers’ land titles for a number of years.

Castriciones assured the farmers’ groups that the present administration would exhaust its resources to resolve all land problems including those from the past.