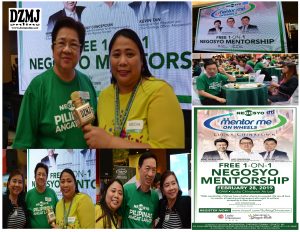 DZMJ Online Season 11 Episode 7 is with Mrs Naty Y. Cheng the President of URATEX foam at the recently concluded GO NEGOSYO Mentor me on wheels at the Lucky China Town Mall in Divisoria. on the green T Shirt of Mr Joey Concepcion is the tagline “PINAS ANGAT LAHAT, meant that with entrepreneurship we can overcome poverty.

RFM 2018 Revenues Grow 12%
Listed food and beverage company RFM Corporation disclosed that preliminary and unaudited financials indicate that RFM is on track to post P14.3B sales for 2018 equivalent to a 12% growth versus last year and with an estimated net income of P1.1B, topping its 2017 income of P1.04B.
RFM President and CEO Jose Ma. A. Concepcion III noted that revenue growth drivers continue to be the ice cream, pasta and sauce as well as milk, flour and mixes business units. “We are very positive on the continued growth of our topline and bottomline this 2019, especially as we head into election season and as we continue to see brisk economic activity and moderating inflation.”
Concepcion, who is also the Presidential Adviser for Entrepreneurship, sees a very robust growth in the Philippines with interest rates softening and a more stable peso with the possibility of further strengthening. Given the collective efforts of both the public and private sectors towards a more inclusive economy, Concepcion also expects better spending power from consumers.
Concepcion also said that their Board of Directors approved a cash dividend of Php280 Million or Php0.0805 per share, for shareholders as of record date of February 14, 2019 and the payment date for which is set on March 13, 2019.
The RFM CEO said that this cash dividend declaration is the first of two tranches to pay out the company’s 50% yearly cash dividend policy based on recurring net income. The company’s cash position is also expected to improve further as much of the major capital expenditures to expand capacity have been completed in 2018.
RFM also disclosed that the SEC has likewise approved the merger of three of RFM’s subsidiaries into the parent company. The merger into RFM of the CLIC (Laguna plant site), ICC (bunline plant) and IAC (head office building) is expected to increase efficiency in overall operations and lesser administrative expenses. Prior to the approval of the merger, RFM’s ownership in these three subsidiaries already ranged between 96% to 100%. 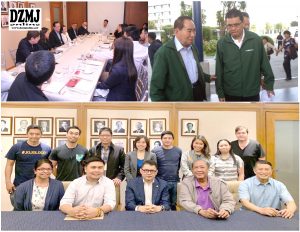 After the first meeting last January 9 with several sharing economy platforms where the main agenda is to push for digitalization in the country, Presidential Adviser for Entrepreneurship Joey Concepcion organized another meeting with motorcycle ride-sharing and logistics digital platforms such as Angkas, Grab, Lalamove and Quad X. This time, the group was joined by Department of Transportation (DOTr) Secretary Art Tugade joined by DOTr Undersecretary Mark Richmond de Leon, LTO Chief Assistant Secretary Edgar C. Galavant, and LTFRB Chairman Martin Delgra III. The insightful meeting served as an avenue to openly discuss the issues concerning the platforms as well as the position of the respective agencies involved.

Believing that digitalization is a game-changer in creating prosperity for all Filipinos, Concepcion extends his support to all online platforms. During the meeting, Concepcion mentioned that the digital marketplace for sharing economy will create opportunities for our micro and small entrepreneurs. “Ride-sharing is the way forward,” he also added.

Secretary Tugade agrees by saying, “digitalization is not only pro-poor but pro-all. Digitalization is a great equalizer.” With the issue on banning Angkas to operate, Tugade clarified that he is not against any mode of transportation as long as it is efficient, safe and comfortable. He also said that they should not be seen as an enemy but as a partner. He emphasized that doing business is fine as long as it is not at the expense of anybody.

Concepcion commended Sec. Tugade’s action of forming a technical working group that will resolve issues surrounding the sector affected by the current policy, laws and judicial decision. The task force formed is a clear indication that government is congenial to working with the industry concerned and openness to work with the private sector which Concepcion has been pushing actively since he assumed the adviser role to the President.