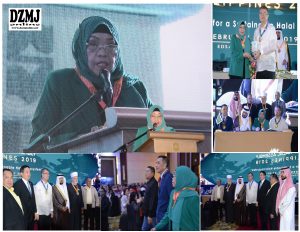 Scientists from the Forest Products Research and Development Institute (FPRDI) have proven the usability of spent tea leaves (STL) as cheap yet reliable additive in producing plywood adhesives.

Their study was able toprove that STL can potentially serve as cheaper replacement for wheat flour when simultaneously used as extender and filler in locally-produced plywood adhesives. Moreover, the STL can effectively reduce the emission of carcinogenic substances when the STL is applied in wood-based panels for home and construction.

The researchers collected STL from a local beverage manufacturing plant, dried the leaves, milled them, and and mixed with urea formaldehyde (UF) resin. The resulting glue mixture was used to fabricate triple-layer plywood panels made of falcata and native mahogany lumber, both of which are commonly found across the Philippines.

Each 5-mm thick panel was tested for its shear strength, cohesive wood failure, and formaldehyde emission. This was done to determine the effect of STL on various glue mixes in compliance with Philippine National Standard 196 and ISO 12466-1 & 12466-2 standards.

“Through this mechanical test, shear strength and wood failure parameters are measured to indicate the performance of the bond between the glued veneers in terms of strength of the bond and amount of wood fibers taken off from either of the two glued layers of veneers being tested,” says Juanito Jimenez, Jr. of FPRDI, a constituent agency of the Department of Science and Technology.

From Trash to Treasure

Nationwide, nearly 18 metric tons of STL mainly derived as by-product from the manufacture of tea-flavored drinks are thrown in landfills or compost pits every day, its ancillary use largely untapped. STL retains much of its valuable fiber and protein components even after multiple uses thus it is seen as a very important material for plywood adhesive..

In relation of this, Jimenez and his fellow researchers at DOST-FPRDI are hoping that technology that may arise based on their methodology would one day be applied for commercial-scale industrial use.

“Our paper presents the encouraging results to prove STL’s potential in plywood manufacture as glue extender to replace wheat flour, as filler to replace coconut shell flour, and as formaldehyde scavenger,” he said.

He cautioned, however, that the use of STL as fuel for energy has commenced as an easy disposal option.

“The challenge now is to match or outdo the revenues/savings generated as energy resource by instead utilizing STL for higher value products, like glue additive, with an extra health benefit,” Jimenez said.

It was just recently that Bumblee of the Transformers’ Autobots ruled the Philippine cinemas. It was evident that movie theaters nationwide have had gathered the younger generation through this type of entertainment genre.

Eventually, the thought of “meeting these awesome robots one day” almost always fill the backs of young Filipino minds. Funny how these movies impart robot-filled imaginations to the young.

Back to the academe sector, the Department of Science and Technology regional office 10 gratefully partners with Robogals Cagayan de Oro in giving free robotics classes to students under grade 10.

It started in 2014 as the first chapter of the Robogals Global Network in Southeast Asia and the Philippines.  As of 2018, Robogals CDO remains as the only local chapter in the country. The organization’s 15 active volunteers have reached 500 students in 18 schools through a total of 20 workshops and events.

The organization’s goal is to increase female enrolment in Engineering and Information Technology courses in the country by directly engaging students, from years four to twelve, with FREE school workshops using various kits that are both fun and educational.

The FREE robotics classes will be part of every Science and Technology Caravan (S&T Caravan) in the provinces of Lanao del Norte, Camiguin, and Misamis Occidental.

The first leg of the S&T Caravan will happen on February 28, 2019, at the Linamon Municipal Covered Court, Linamon, Lanao del Norte.

Aside from the robotics classes, DOST-X will be giving FREE water testing, calibration services, and information materials of the agency’s programs and services.

DOST-X, Robogals-CDO, and the Local Government Unit of Linamon are encouraging the residents of Linamon and its neighboring towns to take part in this activity for the public. 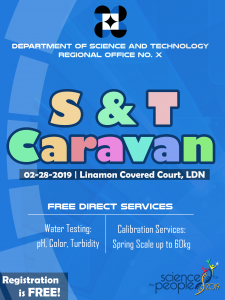 About the picture (posterrobotics.png): Free robotics class for students under grade 10 at the S&T Caravan on Feb 28 at the Municipal Covered Court, Linamon, LDN. 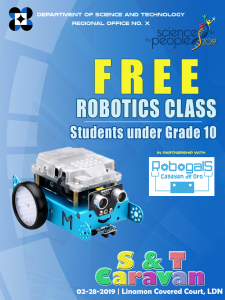