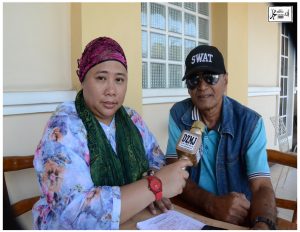 No one would have thought that a newly formed singing group of learners with various exceptionalities would reach a national competition.

But the choir of Tetuan Central School Special Education (SPED) Center (TCSSC) of Zamboanga City in Region IX did just that. Formed only in September 2018 to compete for the Himig Bulilit of the Division Festival of Talents (DFOT), the group proceeded to the regional level where they won their ticket all the way to the National Festival of Talents (NFOT) 2019 in Dagupan City.

Donning well-crafted costumes in white and green, the choir of little angels sang in Chavacano as their warm-up song and the Filipino folk song Pandangguhan which was the contest piece assigned to them by the National Technical Working Group.

Despite Nur Ayna’s condition, she managed to participate in dual events of the NFOT. Aside from the Himig Bulilit, she is also a member of a group of contestants competing for the Madulang Pagkukuwento, which won second place.

“I am happy to represent Region IX and share my talents with everyone. My skill in acting was already known by my teacher, Ma’am Jeniffer Villanueva, so she decided to include me in the Madulang Pagkukuwento. I used to watch teleseryes and imitate the actresses. I actually discovered my talent in singing when I auditioned for the choir formed by our trainers, Sir Anson Atilano and Sir Dionand Alvarez, in preparation for the DFOT,” Nur Ayna shared.

Choir trainers Atilano and Alvarez, on the other hand, invested immeasurable efforts in training the children. They usually practice after class, from 4:30 to 7 in the afternoon. Prior to the training, young choir members underwent rigid screening administered by the two trainers.

Alvarez, a former member of a choir, experienced joining an international competition in Hoi An, Vietnam. He lives by the words of his mentor and former coach, the late Sandra Bernardo, who told him, “We will never pass this road again, that is why we have to give the best to our students.”

Inspired by his mentor’s words, Alvarez began forming a choir since 2012. It was this year’s new group of singers, however, which brought him to the national finals.

“Gift is already there. Talent is either innate or acquired. We should not be selfish with the talent that can be learned by the young people by imparting it with them, so that when we’re gone, the talent that they have acquired will be shared with the next generation,” Alvarez said.

The young choir members felt very excited boarding the plane and having the chance to perform in a national event. Feeling overjoyed, one of the kids named James Teofilo shared their secret to winning the division and regional competitions: “effort and God’s guidance.”

After the NFOT, the TCSSC children’s choir will perform in a national event in their school. END By: Michelle Mina Felstead, Teacher III, Bonuan Buquig National High School, Schools Division of Dagupan City

PHOTO CAPTION
TCSSC – The Children’s Choir of Tetuan Central School SPED Center in Zamboanga City may only be four months old, but they already made it to this year’s National Festival of Talents (NFOT) in Dagupan City. 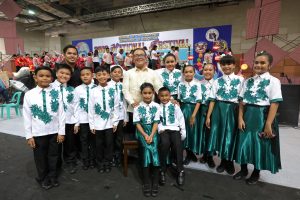 PhilHealth marks 24 years in service with events geared toward UHC

On February 14 of this year, the Philippine Health Insurance Corporation (PhilHealth) is celebrating its 24th anniversary since its creation in 1995 with the passage of Republic Act 7875, otherwise known as the National Health Insurance Act of 1995.

Also in this month of hearts that the nation is observing the National Health Insurance Program Month by virtue of Proclamation 1400, s. 2007 aimed at stimulating public awareness social health insurance issues and encouraging its partners nationwide to fulfill their roles that will lead to its success.

As the country awaits another milestone with the imminent passage of Universal Health Care (UHC) into law, this year’s commemoration shall have the theme “PhilHealth @ 24: Tungo sa Kalusugan Para sa Lahat”.

Highlighting the celebration are the simultaneous holding of a road show entitled “PhilHealth Forward” in Pampanga, Laguna, Cebu, and General Santos City on February 14. The PhilHealth Forward features new services and benefits for the members, recent innovations, best practices of PhilHealth offices, and new tie ups with various stakeholders, among others.

A Health Care Financing Summit will also be held on the second week of March. This collaborative engagement entitled “Multiple Lenses, One Collective Action on Health Financing: A Framework for Action” is expected to draw needed strategies at different levels and seek collective actions for the effective implementation of UHC. Part of this event is a recognition rites to honor outstanding stakeholders and partners.

According to PhilHealth Acting President and CEO, Dr. Roy B. Ferrer, “PhilHealth extremely values the contributions of key partners who have had a significant part on our laudable performance the previous year. It is but proper that we give them tribute for their contributions to the overall success of PhilHealth”.

Ferrer also said that the month-long observance will be marked by a simultaneous thanksgiving celebration on February 14.

Moreover, a stage musical contest will also be held as part of the employee engagement activities through the showcase of talents. Talents from various regional offices will vie for the coveted title, the championship round of which is expected to happen on the second week of March in Manila.

As the most trusted social protection agency in the country, PhilHealth will also hold a corporate social responsibility initiative with select charitable institutions at different sites in the country, while a special Press event dubbed “Kapihan with Media” will also be held for key PhilHealth officers to announce various developments at the state health insurance agency in the run up to the UHC.

“As we move to our 24th year, PhilHealth’s spirit continues to soar high as we prepare ourselves to the coming of the UHC. Our commitment to the health of the Filipino remains strong which is the very essence of our existence,” Ferrer declared. (END)