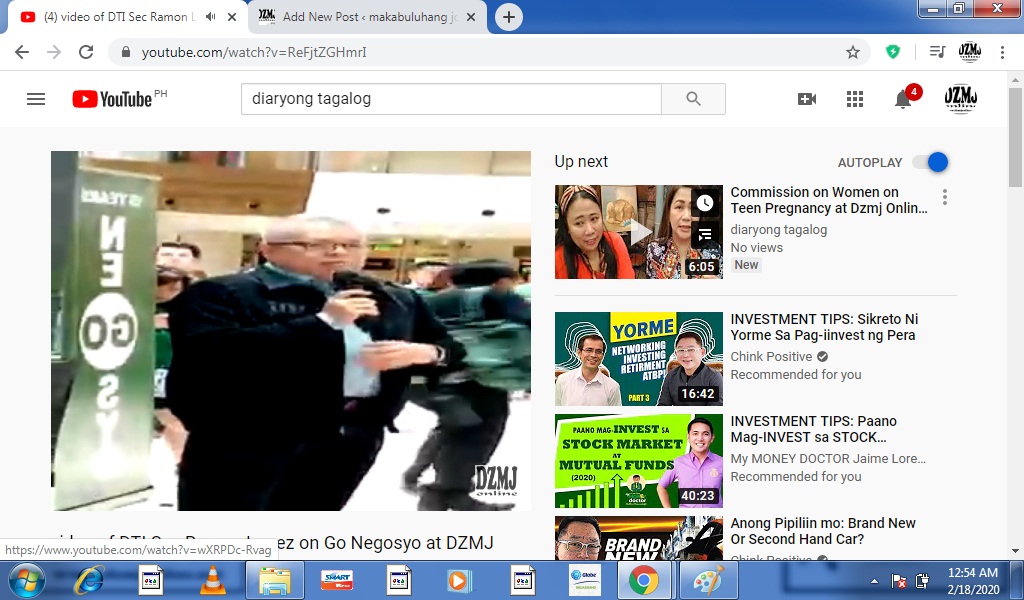 February 10, 2020- DZMJ Online season 24 Episode 8 is at Go Negosyo 15 in Makati with Secretary of the Department of Trade and Industry Ramon Lopez (video only)

MAKATI CITY – Following a meeting with Honda Cars Philippines, Inc. (HCPI) President and General Manager Noriyuki Takakura on 24 February, Department of Trade and Industry (DTI) Secretary Ramon Lopez confirmed that the closure of the Honda car production facility in PH was mainly triggered by the global slowdown caused by the US-China trade war, followed by the current COVID-19 issue. The market slowdown forced companies like Honda to rationalize their global operations, optimizing the allocation of their resources.

“It was clarified that the closure of operations in the country was a global decision by Honda HQ and Philippine operations were not involved in the decision to close the facility in the country,” said Sec. Lopez.

“The reason they cited was a global slowdown in the automotive industry, coupled with a more competitive market with more players. This forced any company to consolidate and select operations with least cost and with a more favorable market position and volume of operation,” he added.

Honda’s rationalization, which began last year, started in the UK, Turkey, Argentina and Mexico. These will affect more countries as Honda continues to rationalize the distribution of their resources and their operations worldwide.

HCPI has been facing challenges in keeping cost competitiveness, producing only 8,000 units per year of the City and BR-V models, as compared to Honda Thailand producing over 200,000 units annually.

The closure of the assembly plant in Laguna will affect the jobs of 387 employees, but other offices such as automobile sales and after-sales services will continue through the Asia and Oceania regional network.

Sec. Lopez said that “there are many new players in the auto industry in the country that definitely resulted in greater competition for auto makers. This development offers new possibilities for alternative car assemblers in the country, especially those which will realize the need to diversify production resources.”

Despite the closure of HCPI, the sale and production of Honda motorcycles will not be affected as it is handled separately by Honda Philippines, Inc. (HPI).

HPI is currently the number one motorcycle manufacturer in the world, with PH among its top markets for motorcycles. Sec. Lopez said that “the motorcycle business is the segment that is growing for Honda. This shows that Philippines is a strong market for the products and price points of Honda motorcycles.”

“With regard to cars, we are studying the imposition of safeguarding duties on car imports and will make sure that ongoing investigations regarding this will not be delayed,” he added.

Secretary Lopez also said that the government is looking into a few other policy suggestions to revive the manufacturing sector in general. These include requiring government-funded projects and projects enjoying incentives to use quality standard materials manufactured locally. He is also planning to revive a campaign to urge Filipinos to buy Philippine made products. END

The Department of Trade and Industry (DTI), in partnership with Walter Mart Supermarket, Inc., is set to launch its newest Go Lokal! outlet on March 2, 2020 at W Mall Macapagal, Pasay City.

Dubbed as “Best of the Philippines”, Walter Mart’s collaboration with Go Lokal! will showcase the finest Philippine food products manufactured by our local Micro, Small, and Medium Enterprises (MSMEs).

Walter Mart has onboarded Go Lokal! -accredited suppliers in its five (5) branches, three in Metro Manila (Macapagal, North EDSA, and Makati) and two in CALABARZON (Tagaytay and Dasmariñas), on top of its existing suppliers of pasalubong products. Among the products selected are dried fruit snacks, banana chips, cookie sticks, crispy squid, anchovies, and coffee in a tea bag. Product selection and supplier onboarding will continue year-round to promote the “best of the Philippines”.

As Go Lokal’s 16th retail partner, Walter Mart is set to roll out the project in its 35 branches nationwide. To date, Go Lokal has a network of 123 outlets.

With Walter Mart as one of the leading retailers in the Philippines, Go Lokal! as a flagship program of DTI remains true to its objective of expanding the access to the mainstream market for the country’s MSMEs at almost zero cost. Walter Mart, on the other hand, has been continuously supporting local entrepreneurs and promoting Philippine products with its supermarket’s pasalubong section. END

on the closure of the Honda car production facility in PH

We just learned today the announcement from Honda. We were told that they had to optimize the allocation and distribution of their resources in the region, which led them to decide to close the assembly of Honda City and BR-V models in Sta Rosa Laguna.

In other words, they may be facing challenges in keeping the cost competitiveness of their local assembly operations. We are meeting them on Monday to consider other alternative options so as to minimize the impact of any final decision they will make.

The cost structure of their local car assembly, which has about 380 workers, is basically challenged and there’s no tariff protection, thus making imports of vehicles as a cheaper alternative. Vehicle imports have been growing, causing injury to local industry, from assembly to the local parts supply network in the country.

Thus we really have to study the need to impose safeguard duty and other measures to provide at least a level of support to the local assemblers.